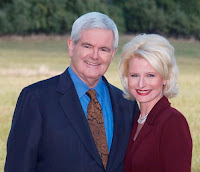 Newt Gingrich, a Republican, served in the House from Georgia from 1978 and as House Minority Whip in 1989. He was Speaker of the House from 1995 to 1999. During that time he never made
Use of military air craft.

The Queen
Nancy Pelosi, Democrat from California, current Speaker of the House. The Pentagon provides the House speaker with an Air Force plane large enough to accommodate her staff, family, supporters, and members of the California delegation when she travels around the country. But, Pelosi wanted routine access to a larger plane. It includes 42 business class seats, a fully-enclosed state room, an entertainment center, a private bed, state-of-the-art communications system, and a crew of 16. Pelosi wanted "carte blanche for an aircraft any time," including weekend trips home to San Francisco. Pretty nice but very expensive perk! Her Air Force C-32 costs approximately $15,000 an hour or approximately $300,000 per trip home.
And she has the guts to confront the Big Three CEOs for flying their corporate jets to Washington! YOU WOULD THINK SHE, ALONG WITH A HUSBAND WORTH AN ESTIMATED BILLION DOLLARS, WOULD LEASE OR BUY AND FLY THEIR OWN PLANE, OR FLY FIRST CLASS ON COMMERCIAL AIRLINES LIKE OTHER RICH PEOPLE.

NANCY PELOSI FACTS:
Speaker of the House Nancy Pelosi's home district includes San Francisco. Star-Kist Tuna's headquarters are in San Francisco, Pelosi's home district. Star-Kist is owned by Del Monte Foods and is a major contributor to Pelosi. Star-Kist is the major employer in American Samoa employing 75% of the Samoan workforce.
Paul Pelosi, Nancy's husband, owns $17 million dollars of Star-Kist stock. In January, 2007 when the minimum wage was increased from $5.15 to $7.25, Pelosi had American Samoa exempted from the increase so Del Monte would not have to pay the higher wage. This would make Del Monte products less expensive than their competition's.
Recently, when the huge bailout bill was passed, Pelosi specifically added an earmark to the final bill adding $33 million dollars for an "economic development credit in American Samoa."
And Pelosi has called the Bush Administration "CORRUPT!"
How do you spell "HYPOCRISY?"
Posted by Bigshow at Friday, August 07, 2009