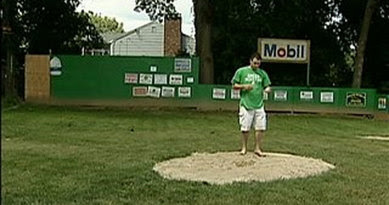 FRAMINGHAM, Mass. -- Town officials in Framingham are trying to strike out a problem.

A replicated Fenway Park in a Framingham yard is causing quite a stir.

Ryan O'Connor, 18, the teen who built it, and his family are now going to bat for their ballpark.

The miniature Fenway Park used as a wiffle ball field is adorned with signs, including a three-by-four foot Mobil sign in centerfield.

"I don't know why anyone would complain; it's not a bad field of a public nuisance at all, and the Mobil sign, I mean we're not trying to be a gas station, we just want to have some fun in the summer," O'Connor said.

But it seems not everyone's a fan.

Complaints from neighbors have resulted in an ultimatum from the city: Take down the signs or face being fined.

The signs violate a bylaw that states there shall be no sign larger than two feet without a permit. The signs adorning their make shift field violate that law.

"A lot of people wrote to the paper and said a bunch of signs around town are illegal and not to pick on a bunch of kids, it just doesnt make sense to me," said Toni O'Connor.

The signs, which were all donated by local businesses, need to be down by Tuesday, or the family will be fined.

Framingham city officials could not make anyone available to comment on the situation.

However, Ryan's friend Joe Hauck who maintains and helped build the field thinks he may have a solution to the problem.

I don't get it. Well, I mean I do get the town ordinance against signed over 3 feet tall but I don't get why people make mountains out of mole hills. These kids are just being kids. People want to bitch that kids are lazy, they are fat, all they do is play video games, they have no direction and they have no goals. Seems to me that this group of kids is none of that. They just want to have a cool yard to play wiffle ball in. Fuck, when I was young it was wiffle ball and street hockey in the middle of the street we didn't have a fancy field.

I bet the person who started the bitching was the parents of some pussy kid who struck out 13 times in a game and went home crying that he can't hit. He probably blames his parents that he sucks and will be following up with a law suit in a week.

If this were my house, I would take down all the signs then paint them all on the wall. Thus making them part of the wall. Then just to be a dick, I would remove the Mobile sign and put up lighting so that my kid and those of the neighborhood would be playing till midnight if they wanted. Hows that for a big fuck you Framingham.
Posted by d at Saturday, August 08, 2009