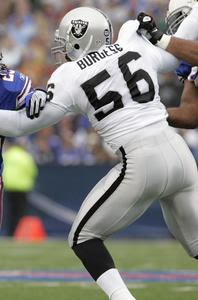 
FOXBOROUGH, Mass. -- The New England Patriots acquired Derrick Burgess on Thursday after the two-time Pro Bowl defensive end held out of Oakland Raiders training camp in the hopes of being traded.

Career Statistics
Seasons: 8
Tackles: 227
Sacks: 47
The Patriots gave up undisclosed draft considerations for Burgess, who's coming off an injury-plagued season in which he had 3.5 sacks in 10 games. New England released offensive lineman Al Johnson to create roster room for Burgess.

The trade was announced on the ninth day of Burgess' holdout from the team with which he recorded 38.5 sacks in four seasons, including a club-record and league-best 16 in 2005. Burgess had 11 sacks the next season and made the Pro Bowl both times in 2005 and 2006.

Burgess' sack total dropped to eight in 2007, but he missed two games.

In three seasons with the Philadelphia Eagles and four with the Raiders, the 6-foot-2, 260-pound Burgess had 47 sacks in 85 games. He also missed the 2003 season because of a torn Achilles' tendon.

Burgess is entering the final year of his contract with a $2 million salary and believed he was underpaid for most of his time with the Raiders. Burgess came to Oakland when he signed a five-year, $18 million contract as a free agent before the 2005 season.


The Patriots and Raiders held trade discussions around the time of the draft in late April. Then Burgess stayed away from all the Raiders' optional offseason workouts and didn't go onto the field during May's mandatory minicamp because of a reported upset stomach.

The Patriots signed Johnson in March after he spent four seasons with the Dallas Cowboys, who drafted him in the second round in 2003 out of Wisconsin. Johnson played for the Arizona Cardinals in 2007 and was on injured reserve in 2008 before being released. He then signed with the Miami Dolphins, for whom he played four games.
Posted by ChiefDude at Thursday, August 06, 2009