So I guess I need to talk about this whole Mike Vick thing being the resident Eagles fan. Let me first say that I would like to thank everyone for the 50+ texts I got within an hour of the announcement that the Eagles signed Vick. Some of my favorites were:

U got the ULTIMATE WEAPON now… 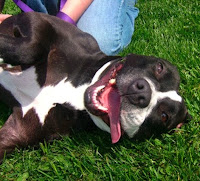 My initial reaction was a combination of shock and anger…and then I looked over at my dog and realized I’ll never be able to bring her to Philly. I can’t take any chances with Mike Vick running around on the prowl. Ok…no more joking. There are two ways of looking at this thing…..the football side and public relations side.

On the football side of things I just don’t see how this is going to work. At the most Vick will play 6 or 7 plays a game…and that’s assuming he can still run and be elusive like he was. And what happens after McNabb throws 3 passes in the dirt and fans at the Linc start chanting for Vick. I’ve always been a huge fan of McNabb’s but he is a crybaby and probably the most sensitive QB in the NFL. This can go downhill real quick and I’m sure that is exactly what will happen.

Obviously the public relations side is an absolute disaster. As hard as the Eagles try there is no way you can justify putting the dog killer on your team. And what pisses me off is as a fan….the Eagles have put me in a position where I have to cheer for this guy. Un-freakin-believable!

Look I understand people deserve a second chance…..but to give a person that second chance both parties should get something out of it and I don’t see what the Eagles get out of this. I feel like the house owner who just found out that his electric bill will be cut in half because they are building a nuclear power plant….the only negative part is the plant is being built in my backyard.

Just so I understand this. The Eagles fired a retarded employee because he criticized the Eagles on a blog for not resigning Dawkins. The guy apologized and asked for a second chance but that wasn’t good enough….. so they put the guy out on the street. Yet a convicted dog murderer asks for a second chance and that’s OK. Hmmmmmmm!
Posted by Iggles at Friday, August 14, 2009