So my friend Karen, aka Krazy K, has been home from Wisconsin this summer and she has to clean up her things at her mother's house. Apparently she came across the flyer for Chrissypalooza 1999. It was a crazy party that featured tents, horse shoes, beer die, keg stands, flip cup, beer pong, naked slip and slide, trampolines and all other types of debauchery. At the time, this was supposed to be the 1st of many Chrissypalooza's. We have had many good BBQ's since then but nothing has come close to this one... 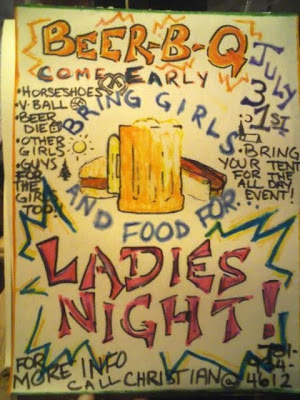 P.S. - Part of the reason there was not a second Chrissypalooza was Deene Jordan showed up with a sectional couch to sleep on "Deene don't sleep on tents".

P.P.S - According to Chrissy this is when my event and fun planning really started.
Posted by d at Wednesday, August 12, 2009

wow that was an AMAZING time... maybe its about time we had a second one!!

show the pictures of what happens when you pass out at one of these events as a public service announcement!

I need to find and get a scanner for them

I'm pretty sure that party was the last one I attended before I moved away from MA...maybe there needs to be another one after I move back next year, it only seems right...dangerous and inappropriate, but right, somehow.

you could have had a 10 year anniversary bash