You Kin Do it

NATICK — All the customer wanted was a coffee. Instead, he has to buy four new tires.

Natick police say a clerk at a Dunkin’ Donuts slashed all four tires on a customer’s Jeep after the two got in an argument over how long it was taking the worker to prepare a cup of coffee.

Police say 39-year-old Thomas Zazulak of Framingham was arrested on Wednesday and charged with malicious and wanton and destruction of property and disturbing the peace while armed. He is scheduled to be arraigned Thursday in Natick District Court.

Police tell the MetroWest Daily News that the customer — whom they did not identify — left the coffee shop because it was taking to long to make his coffee.
Zazulak allegedly followed him outside, pulled a folding knife, and slashed the tires.

I don't know why but I find this story funny as fuck!! I mean this dude just wants a cup of coffee. We have all been there on a busy Saturday/Sunday morning. The lines moving too slow, he makes a remark and storms out. Should of been the end of the story but NOT SO FAST MY FRIEND! You are going to need 4 new tires thanks to my new switchblade. It slices, it dices and it cuts all 4 tires in a jiffy!

The Bruins have launched their Annual 7th Player Award Voting/Sweepstakes: 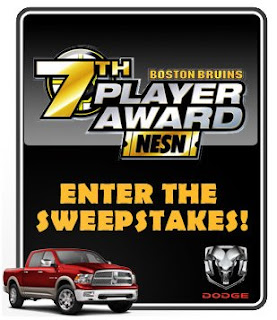 Shoulda went to starbucks, its worth the wait

I know exactly which Dunkins that is. You always do the Drive-Thru....going inside is like a death march.