Tonight, at the TD BankNorth Garden, Joey T makes his return to Boston. I really miss watching him play and all that he brings to the table. In a way, this is like that awkward feeling you get bumping into an ex at a high school reunion. It should be a good battle between two 1st place teams. I am hoping this is a finals preview. 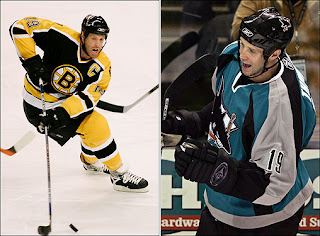 And to answer this guys question: 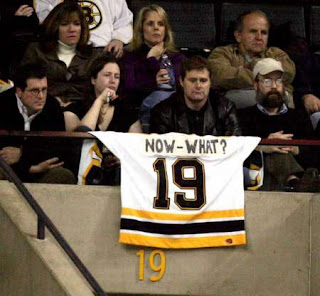 But there are so many numbers this season that help define the Bruins, and have restored a love affair with Boston hockey fans for a franchise that largely had fallen out of favor in recent years.

So here are 10 numbers that provide insight into the B’s success, present and future:

9 - The number of Bruins already in double figures for goals. No other team in the league can match that level of offensive balance and depth.

66-32 - The Bruins’ scoring lead in their 54 third periods. This is maybe the most impressive stat of all about this team, pointing to a collection of players who are at their best when the outcome is on the line.

15-4-3 - The B’s record in games in which their opponent scored first. This speaks volumes about the character and confidence of this club. The first goal of a game usually is a reliable indicator for which team will win and lose. The B’s .682 winning percentage in such games is by far the best in the NHL.

11 - Number of Bruins skaters in Saturday’s 4-3 OT loss to Philly who are age 26 or younger. This may be the best news of all for B’s fans, a reminder that as good as this team is in 2008-09, it should get better and better over the next few years.

26-0-2 - B’s record in games they led after two periods. Recall the nightmares of 2006-07 under Dave Lewis, when the B’s let so many third-period leads slip away. There almost was an expectation that panic and confusion would set in. It’s going to happen to every team sometimes, but for this year’s B’s, very rarely.

2 - Bruins’ longest regulation losing streak of the season. Another indicator of character and good coaching, as the team almost always bounces back quickly after a sub-par showing. Twenty-eight games remain, but if the B’s can avoid losing three in succession, it will be the first time for this franchise since 1977-78.

54 - Plus/minus for B’s as a team, with 135 even-strength (or shorthanded) goals for and just 81 against. This is by far the best ratio in the NHL, with Chicago No. 2 at plus-35. Power-play goals are an important, but limited indicator for a team; even-strength play is far more revealing of the quality and depth of the entire lineup.

51 - Number of previous Bruins seasons in which they didn’t collect as many points (85) as this team already has, with 28 games left. The B’s are on pace for 129 points. Granted, there has been point-inflation with added games and the overtimes rules. Still, this would shatter the team record (121) set by Bobby Orr’s ’70-71 B’s, who went 57-14-7.

80-37-19 - Bruins’ two-year record under the helm of coach Claude Julien and assistants Craig Ramsey, Geoff Ward, Doug Houda and Bob Essensa. Is there a better coaching staff in the NHL, one that’s done a better job getting a team to play hard and the right way night-in and night-out?


Last nights Beanpot Finals game between BU and Northeastern started off fast paced and hard hitting but by the time the final horn blew Northeastern looked gassed. BU won their 29th Beanpot in the tournaments 57th year running. From the crowd last night there seemed to be lots of NU supporters while the BU fans think that the Beanpot is THEIR right to passage.
Posted by d at Tuesday, February 10, 2009