I know, I know I always write on Fridays. Well yesterday I wasn't feeling it so... SUCK IT!!


Frank keep trying to make them shotguns a little bit faster. One day you may be able to beat an 11th grader.

Now lets put our glasses on so that we can read this a little bit better: 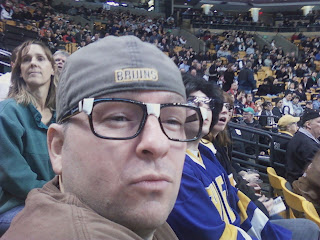 Last night was Hanson Brothers Night, from Slap Shot,at the Bruins game. The first 10,000 fans got these glasses. Mikey T was fortunate enough to score a pair. 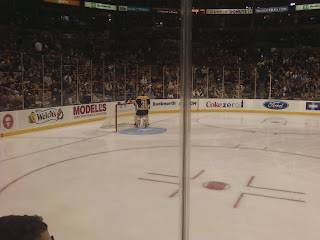 This is where we were sitting - Matty, Brian, Mikey T and I. Not bad for some free seats. The Bruins really hook you up when you buy season tickets. Four free tickets to a game, two rows from the ice? Thanks Mr. Jacobs.

Since it is Saturday and all I usually do is watch College Football, here are my picks for today:
West Virginia -7 over Louisville - Pat White can not be stopped
Virginia +3 over Clemson - Al Groh at home
Vanderbuilt -3 over Tennessee - Fulmer it was time to call it quits last year
Michigan State +15.5 over Penn State - I'll take the points, even though MSU hasn't beaten Penn State at home since 1965
ECU -6.5 over UAB - WHAT THE FUCK IS UAB??
IOWA -6 over Minnesota - I like the Golden Gophers at home but I think Shonn Green is too much for them.

Tomorrow we should all be down the new Atlantic Beer garden watching football and drinking beers. Feel free to stop down
Posted by d at Saturday, November 22, 2008

Now we know what Frank Brown was doing when he called in sick the other day. Crying like a little girl just because you call in sick. CHUMP!