Son Of A Bitch

I know you Bastards knew about this and said nothing to me. Now I have to sign up for Facebook which I had no intention on ever doing.

Eagles Fans Roll Deep in Boston
This Eagles fan report comes to us from James Conroy.

Can you imagine a group of 75 or more Browns fans, or Dolphins fans or Lions fans gathering at a bar in South Philly to watch their team each week? It wouldn't happen. Yet in the shadow of Fenway Park, dozens of Eagles fans who live throughout the Boston area meet up to cheer on the Birds each week and take over a bar.
I moved to Boston the day after the Phillies World Series parade - a pretty good sendoff. After never really living that far away from the Philly area, I was a little concerned that my time in Boston would have me watching Patriots games and missing out on my Philadelphia sports. But, with the wonderfulness that is the internets, I was able to find a group of Philadelphia expatriates who get together weekly to watch the Birds.
For the last two years, as many as 200 Philadelphia Eagles fans have gathered at An Tua Nua, an Irish pub just blocks from Fenway, to watch games on two big screens and celebrate their love of the Eagles without having to deal with the annoyances of opposing team's fans.
Although people have said that there are other Eagles fans who meet up at bars around the Boston area (like Champions), it appears the crowd at An Tua Nua are the only ones who take over an entire room and get food and drink specials all to themselves.
David Quinn, who is essentially the head of the group, said that for game one this year against the Rams, over 160 people turned up and the group was able to raise more than $140 for the Eagles' "Tackling Breast Cancer" fund and have raised close to $800 as of yesterday.

And from what I could tell yesterday, the bar loved the fact that Birds fans show up there every week. When I asked the bartender if she was concerned about Eagles fans bad behavior which is promoted by the media, she didn't know anything about it and said all the fans at An Tua Nua were great.
With close to 200 members on "Philadelphia Eagles Fans of Boston" Facebook group, they've proven that basically anywhere you go you're bound to run into Eagles fans. I mean, about five years ago I'm in St. Lucia on vacation wearing a Eagles t-shirt and a guy stops me to find out the score of the game the previous week because "these bastards were watching soccer."
And, unlike Eagles players, everyone at Au Tua Nua knew that a game that ends 13-13 after overtime is called a tie. 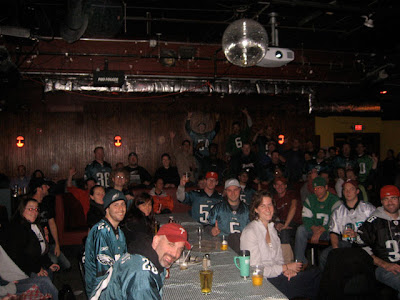 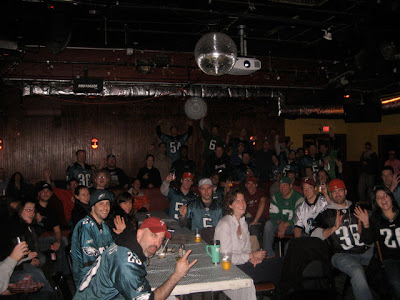 thanks for the heads up i'll avoid that area at all costs.

When do these 200 fans start rioting and burning the place down?