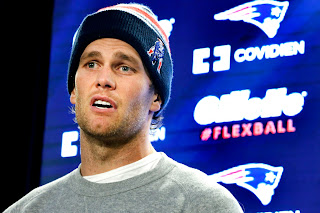 Look I'm not going to rehash any of my other blogs but, look the NFL has to suspend Brady. This crap has gone on long enough and it's not the actual cheating. I' m talking about the borderline WWE Media Driven storylines that is the new NFL. If you can sit back and tell me football has always been this way then your a fucking mad man/ mad women. It's every other day there is some new drama unfolding. Domestic Abuse/DUIs/Cheating you name it. And all the meanwhile the actual football has taken a back seat. Anybody in Patriot Nation least bit concern by the Pats Running Game?

Nah! Why fucking would you! Your all investigative reporters and ball physicists now. It's all good Bill will figure it out (ps he's an asshole). We got Blount! (Any fan of football knows Blount has some conditioning issues/ tendency to get face punchy if he's sticks around long enough). But in Bill we trust!

And I know I'm going to hear hey CBR, "your a clown if you think this phases the pats". My rebuttal is your a fucking moron if you think it doesn't. I can all but guarantee Bill and the boys didn't even change up one thing scheme wise in the "off" chance Brady is out. Yea know why because they're arrogant. They had this in their minds beat from the jump.

And that is why Brady should go for at least a game. Because of the arrogance of it all. Much like the late 90s Yankees on many levels the Pats believe them selves to be above rules. Always have, always will. Suspending Brady Game 1 in the grand scheme is meaningless but maybe just maybe it will ground everyone just a little in title town a bit. Until it's used as a rallying point by game 6. The NFL can't control anything. Especially the behavior of its players but, maybe just maybe it can save the New England fan and team from the oncoming onslaught of arrogance that will inevitably let go when Goddell wipes the slate clean, let's Brady walk only to add to his Pats Bad Guy Storyline he's been working so hard on.


PS anybody seeing what Chip is building in Philly? Gonna be SPECIAL
Posted by ChiefBlogRuinner at Wednesday, June 24, 2015