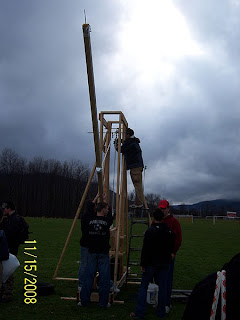 TUCSON - Smugglers using a catapult to launch marijuana across the border were observed on a remote video surveillance system, and National Guard troops coordinated with Mexican authorities to disrupt the far-flung operation.

Border Patrol agents working with the National Guard contacted Mexican authorities, who went to the location and disrupted the catapult operation. The camera showed the individuals fleeing the area before they could be intercepted by Mexican authorities.

The Mexican officials seized about 45 pounds of marijuana, a sport utility vehicle, and the catapult device.

"The Border Patrol's partnerships with Mexican authorities, the National Guard and the public enhance our efforts to address and disrupt the organized drug trafficking threat at the border and serves to degrade the capabilities of transnational criminal organizations," states Associate Chief Jose Cruz. "With their continued support and that of the public, we will continue to more effectively address threats before they cross the International Boundary."

Man this is the version of the pulley used, this thing is straight out of mid evil times. There was a video of this but it would not let me post it for some reason but these dudes where launching pounds over the fence onto the U.S. side of the fence.
Posted by ChiefDude at Thursday, January 27, 2011