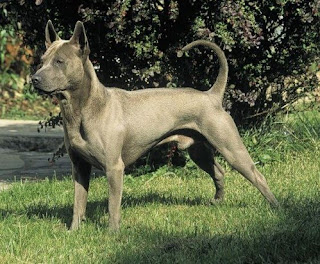 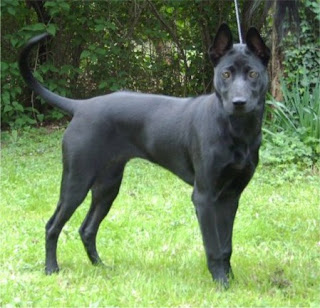 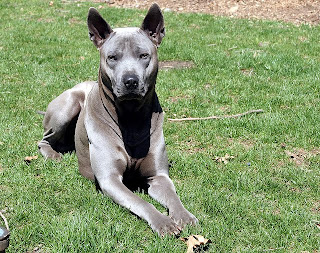 The Thai Ridgeback is a muscular, medium-sized pariah-type dog with a wedge-shaped head, triangular-shaped prick ears, and a very short, smooth coat. It has a pronounced ridge on its back formed by hair growing in the opposite direction that extends from behind the withers to the hips. Puppies are occasionally born ridgeless. Thai Ridgebacks have a muscular and streamlined body, making them extremely agile. The tail is carried upward called a sickle or sword tail. Its forehead wrinkles with enormous expression. Like many eastern breeds, the Thai Ridgeback has retained a 'scissor jaw' where upper and lower teeth interlock when the jaw bones clamp down. The tongue can be black or have black marks. Eyes are almond-shaped and brown but may be amber in blue dogs. The ears are set low and point slightly outward. The ears stand up progressively during the puppy growth period, they are not cropped. The back is straight and level. The coat is short, hard, and straight. Due to the length and density of the coat shedding is minimal, occurring once or twice yearly. Because this breed does not have an undercoat the hair does not usually bother people allergic to other breeds of dogs. Coat must be solid colors of blue, black, red or fawn with a black mask being acceptable on reds. However, brindle and white are also found but are not acceptable colors. For international show and competition, shoulder height should be 22-24 inches (56-61 cm) in males and 20-22 inches (51-56 cm) in females. The weight averages 35–55lbs in females and 40-60lbs in males.Thai Ridgebacks are an intelligent breed. The energy level is typically medium to high, with most of the day spent lounging and activity periods occurring in sporadic bursts. Well bred and properly socialized Thai Ridgebacks make loyal, loving family pets. They are naturally protective of their home and family and can be aggressive or shy when not properly socialized. They are best kept by consistent owners who have a thorough understanding of dog behavior. Because of prior geographic isolation and lack of human contact, the Thai Ridgeback remains independent minded and much of the original natural instinct and drives remain intact, particularly prey drive. Due to its nature, the Thai Ridgeback is not recommended for the novice dog handler. They have an excellent jumping ability and may seek to roam if not properly contained.