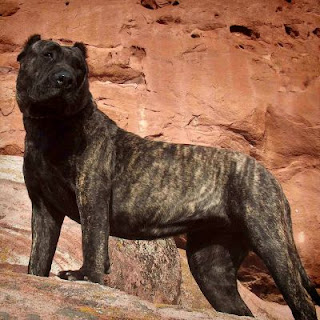 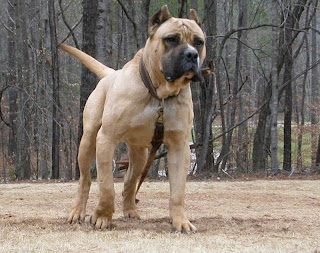 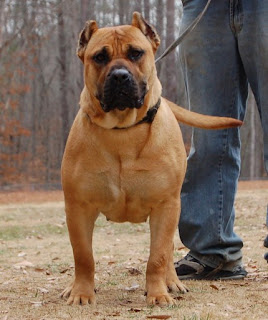 First introduced to the world outside of Spain's Canary Islands by the American Anthropologist Dr. Carl Semencic in an article for Dogworld Magazine and in his books on the subject of rare breeds of dogs, the Presa Canario or "Canary Dog" is a large sized dog with a thick and muscular body.[1] The head is broad, massive, square, and powerful. Proper head and good expression are part of the breed standard, and are manifest in the best breed specimens. The ears are normally cropped, both to create a more formidable expression and to prevent damage while working with cattle. If cropped the ears stand erect. In countries where ear cropping is banned the ears are close fitting to the head, they hang down and should be pendant or "rose" shaped. The lips are thick and hang in an inverted V where they join; the flews may be slightly loose. The interior lips are dark.[2]

The breed is also characterized by a sloping topline (with the rear being slightly higher than the shoulders). Another characteristic of the breed is the shape of the paws (cat foot) and the catlike movement of the animal. The body is mesomorphic, that is, slightly longer than the dog is tall, contributing to the feline movement. The Presa should be powerful, balanced, and imposing in appearance. It is heavily built, but able to move with great athleticism.Presas are of strong character and are dominant animals requiring early socialization and obedience training.[5][6] In some situations, the Presa can be aggressive toward other dogs and suspicious of strangers.[7] Once the dog has been properly socialized and trained this becomes the exception rather than the rule. Many Presas share their homes with children, other dogs, cats, horses and other farm animals.
Posted by ChiefDude at Wednesday, December 08, 2010

It’s really a nice and helpful piece of information. I’m glad that you shared this helpful info with us. Please keep us informed like this. Thanks for sharing.