I actually debated back and forth, if I should do a Bruins game 7 review. I am still pretty pissed off but after seeing the Lil Crusher picture again, my mind was made up. Onto the review!! 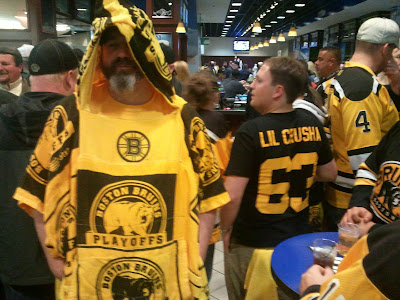 After work MikeyT and I went over to the Garden area to grab some food and meet up with Rio and Big Bob. We decided on Porters for an early dinner. The food was ok but the prices were fantastic, Chrissy if you go down that area for an afternoon game it is right up your alley, our bill was only $22.36. After eating we stopped and grabbed Bob a birthday card and some scratchies(hope he won) then we headed to﻿ Northstar.

Now, last time we went to this particular bar they didn't ask me for my debit/credit card to start a tab, I just assumed they knew we always go there so we are cool. I was surprised that they remembered my last name to run the tab. Either they love our tips or they remember lushes(I am going with they love our tips). We stumbled upon Mikey Doyle and Georgie; man can they talk. The bar filled up pretty quickly and most people were chatting about how confident they were the  Bruins would win. After paying the tab and heading to the car to get my Towelman attire we find a parking ticket on MikeyT's Jeep. We were paid till 7:03 but somehow got a ticket at 6:50? How the fuck does that work?

We roll into the Garden at 7:15 and there are no fucking towels to be had. The damn Ice Girls had given them all out. This can not be a good thing. How can Towelman have no towels? First the ticket, now this but to make matters worse Sterling, the beer vendor has been fired. That's a motherfucking trifector before the drop of the puck. The only thing we have to counter this increasing black cloud is the fact MikeyT figures out Albie and his sister Tyese have been named after Al Be Sure and the R&B superstar Tyrese. LETS GO BRUINS!

The crowd is pretty pumped up for this game and why shouldn't they be - game 7 at home, winner moves on and every game has been decided by 1 goal. Everyone is at their seats(either sitting or standing) as they announce Reggie Lemlin as the honorary captain for the game. I was more of a Moog guy but who doesn't love the footage of Lemlin pumping that old school helmet after a win?

The Bruins are flying high in the 1st period but the Caps score 1st. After one we are down 1-0. We meet up at our usual spot, the Hub Bar, after each period to shoot the shit. We discuss the game and the fact that Sterling got shitcanned (I blame Rio's sister but that's for a different blog) then its back to the seats for the 2nd period. Tyler Seguin ties this bitch up at 1 and that's where the score stands after 2. I grab a pretzel and meet up back at the Hub bar. As has been the norm the past 6 games or so that I have attended, the 50/50 raffle lady seeks out our table to buy raffle tickets after each and every 2nd period, tonight is no exception. MikeyT gives her a ration of shit about how she has never sold a winning ticket and the whole thing is a scam but we still throw up our cash. Ben Gunn and his new lady have made a surprise visit to the Hub Bar. Apparently, they could see us from the balcony and wanted to share in on the laughs. There is a ton of action to start the 3rd and plenty of chances for the Bruins to score but they never seemed to get a lucky bounce this whole series and tonight that was not going to change. After some tense moments the 3rd comes to a close and we are headed to overtime. Since they no longer are serving beers we are no longer meeting up after periods. As they clean the ice, I get my smiling face up on the Jumbotron. There is an anxiety creeping over the crowd. They can tell a dirty goal is going to be the difference between going to round 2 and going to play golf. The action was fast, back and forth like the last round of a heavy weight fight. The Bruins tried a dump that was intercepted causing a break the other way. That rush was partially broken by the defense scrambling to get back but somehow Mike Knuble got a backhand shot off. Thomas made the initial save but never got a chance on Joel Wards overtime-game-winning-game 7-goal as Knuble crashed the net.

I do not want to sound like a homer but shouldn't the series winning over time goal be reviewed if there is a player standing in the crease and the goalies face is jammed into his stomach? I am not even saying that it was interference but shouldn't it be reviewed?

Tip your caps to the Caps. I still hope they lose in the next round.

If you hear sound bites on Toucher and Rich of someone screaming "MAKE THE SAVE THOMAS" then that was probably MikeyT being interviewed by Adolpho after the game. All I could do was swear.

Till next season Bitches!!