Thats right, the Bruins season starts this Thursday so I am officially calling this month OctoBear!!  If you don't like it then go back to watching the Red Sox, oops ya can't because they choked. 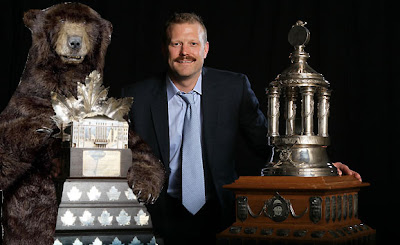 This is what I learned:
1. Everyone has a take on the Red Sox fiasco but only those guys in that locker room know the real deal.
2. The Fat Cat in Quincy has some sort of habenero vodka infused wings. Sounds great!
3. I joined a fantasy hockey league. I've never been in one, anyone got any advice?
4. You ever just have one of those days? Today is one of those days.
5. BJ's already has Xmas stuff out. UHM HELLO ITS 3 months away.
6. Ronin will be 1 tomorrow.
7. Jeffrey has a girls name finally picked out but he still needs a boys name.
8. I had no idea that Friendly's was based out of Wilbraham, Ma. I couldn't tell you where that is but hell its somewhere in Mass.
9. Supah P is trying to get used to how quiet it is in Pembroke.
10. Welchie is rocking and rolling up at Presidents golf course but he is still looking for a job.
11. Julie Nickerson's apartment was recently turned into a real life CSI episode. When she got robbed, they finger printed the joint and there was a chase.
12. The Skza is cleaning up with the book. Maybe you should call in Sunday mornings for his weekly picks.
13. Iggles and his old lady are tieing the knot this week. Will there be a baby Iggles on the way?
14. The BC Eagles football team looks like absoulte shit.
15. I have lived in my house now for exactly 1 year.
16. Villenz Dillons could have traded BOTh Rehsard Mendenhall and Daniel Thomas and now they are both hurt.
17. Is anyone watching any of these playoff baseball games?
18. What does one do if they are not into Sunday Football?

Looks like Chrissy wants to get togther this week/weekend to try the wings at the Fat Cat. Anyone interested?
Posted by d at Monday, October 03, 2011