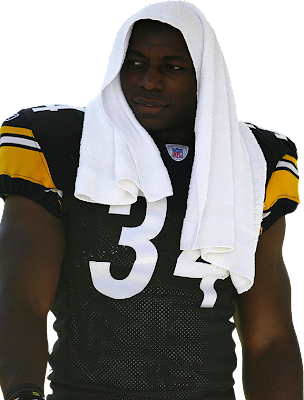 Tmx is a fantasy football reporting media with an association with the number 9 reporting site Folan.com. Tmx is COMMITTED to 85% truth in all reports!! There were some big weeks by alot of big name players as well as some tough injuries to big name players. The winner this week was once again the Slippery Wizards. Tmx dreadfully made the call to the Wizards team owner. Hey its Tmx looking to hear a comment about your week 2 win. Sounding groggy and possibly under the influenc, " who's this? oh Tmx yeah I've been up all night hoping to pull off this win, what the hells up with only 2pts for a safety? this league is out to stop the Wizards from winning" Uhmm you were ahead by 70 going into the night game and your defense didnt even get a safety? " hold up Tmx you anti Wizards too? first no bonus for my qb getting 500yd or even 400yds now 2pts for a safety. I'm done. I gotta hit the waiver wire and get a defense that gets safeties CLICK. Well there you have it. Guess two wins still wont make the Wizards stop complaining. 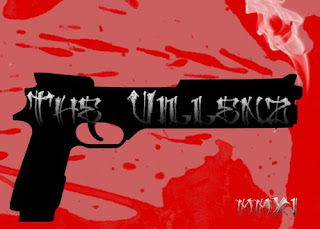 Now onto what Tmx is really here for- TO HELP. This weeks last place team was Dillons Villenz here are the totals- Kolb 20pts; Mccoy 25; Mendenhall 14; Mike Williams 0.5 ( note he had MINUS four yards rec); D. Jackson 3pts; Chandler 8pts; Janinkowski 5pt; Pats d 14pts for a total of 89.5. The easy choice for why the Villenz came in last would be the MINUS 4 yds recieving Mike Williams finished with. Guy played a whole game and thats what he ends up with? Wow. Tmx however did countless hours of investigative research and player analysis to find the problem. The problem is the Villenz have too many rbs. Tmx never recommends trades but in this situation it may need to be explored!! As a manager you need to have choices but when you get overwelmed it creates a bad clubhouse. How do you look at the guys you benched and say sorry this guys better? YOU CANT. Tmx made the call to good friend of Tmx Rashard Mendenhall. Hey Mendy its yours friends at Tmx. " ooh bet, did i get Tmx player of the week? I brought one to the house saved Big Ben on that one. This is sweet" Uhmm actually we are calling cuz you were the lowest scorer on Villenz team and we need to know if you can step it up? " Tmx you joking? what is dudes team all rbs or something? dang, have him trade me an rb I'm in Mjd's league can he cross trade? I mean I got 66yds and a td maybe he got too many rbs or something. Call me when I get Tmx player of the week bro. Mendy out" Jeez sounds like the clubhouse isnt happy. Well Tmx wishes the Villenz well and hopes they solve the problem!
Now onto the All Iggles Team.

The all Iggles team is dedicated to former Iggles owner that left the league in a storm of controversy which involved quitting the league and selling off team assets. These players are the ones Iggles owner would have started and the members of the league chose not to for whatever reason; 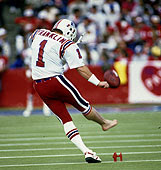 This weeks total was 167.5 down from 193 last week. I'm guessing the reason is the shame that is associated with being on an all Iggles team. Apparently Wizards and Beach Bums like the squad as they combined for 64pts!!! Tmx is investigating if Beach Bums sat F. Jax as a sort of "thanks for gore" tribute. Either way lets try to keep the Iggles team in the 80's people!! Now onto the tmx player of the week 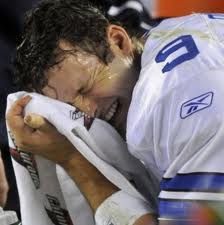 Tmx player of the week is the player who came out of nowhere and got it done. This player is usually not one of your first players taken Tmx expects them to excel. This week we had a clutch 40pt performance for Jeremy Maclin and a 4td game from Matt Stafford but with Stafford sitting alot of the 4th quarter and doing team Hoodsie wrong by not coming out for 6 more yards to get him the 300yd bonus he was out. Maclin's performance was great but Tmx went with Tony "Holy" Romo as the player of the week. He put up good numbers and left the game only to see Jon Kitna come in and throw 2 picks so he said put me back in and leads the team to victory. He did all of this with a punctured lung and cracked rib!!! Thats Tmx player of the week type stuff. Get better Romo and congrats. We didnt want to disturb Romo so we call wide reciever X ( that dallas wr who got caught at the 1 when he should have had a long run and got Romo a td and bettors a cover) Hey its Tmx what's good wide reciever x? " why aint you using my name? you see that play?" tmx hears what sounds like a door getting kicked in then " what the? who are you? whats a skza? no no i didnt know you had money on the game..........CLICK" Well I hope wide receiver X is ok. 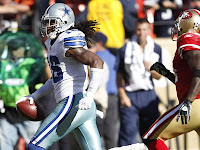 Til next week hope everyone is healthy and outscores the Iggles.
Posted by d at Tuesday, September 20, 2011