Everybody was Kung Fu Fighting

DailyMail - It seems America has a new Karate Kid.

Cory William Morrel, 27, allegedly knocked out his mother after she told him to stop practising martial arts in their Florida home.


She was kicked in the head by her son and left unconscious for five minutes, police said. Morrel has been arrested on suspicion of battery, the Naples Daily News reported. 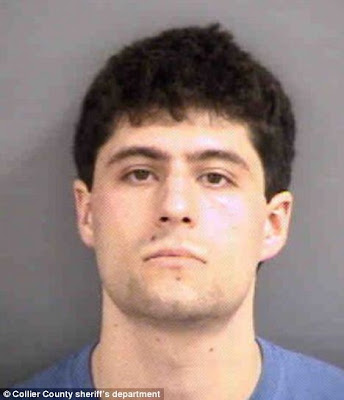 Collier County sheriff’s deputies were dispatched to Morrel's home on Friday and found his mother was unable to recall what happened and appeared disoriented and nervous.


She shouted at her son several times, asking him what happened, reports said.


Morrel told deputies that while practising martial arts in the living room, he accidentally kicked a wall causing a scuff mark, the Naples Daily News reported.


He said his mother became angry with him and cursed at him.


It is unclear what happened next due to redacted information related to Morrel kicking his mother in the head, but the suspect said he called 911 when she became unconscious.


His mother was transported to an NCH hospital for further medical treatment, the Naples Daily News reported.


Morrel, of the 7800 block of Regal Heron Circle in East Naples, faces a charge of domestic battery.


Jail records show Morrel was still being held yesterday on $10,000 bond. His court date is set for September 20. It is not known if he has an attorney.

I guess the moral of the story is "BITCH WANTED SOME BITCH GOT SOME". This dude is - karate here, karate there, karate everywhere and he just happens to scuff up the wall with one of his bad ass kicks? Guess what Mama, you can not just start swearing at a known karate machine and not expect to get KNOCKED THE FUCK OUT!!! You know she was knocked out for more than 5 minutes. I don't care what this report says.
Posted by d at Wednesday, September 07, 2011