Thank you sir. I'll have another

Here's mud in your eye, or at least vodka. 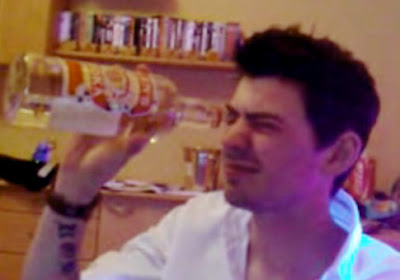 The latest ridiculous (and health-endangering) drinking stunt to gain popularity among college students is called "vodka eyeballing," where buzz-seeking partiers tip back their heads and have a shot of vodka poured directly on the eye.

The trend is believed to have originated at Las Vegas nightclubs, as waitresses, hungry for tips, performed this cheap trick. Since building momentum in the U.S., vodka eyeballing has gained a foothold in the U.K. and Scotland, reports the Daily Mail’s Barbara Davies.

YouTube features more than 800 clips of vodka eyeballing. There’s even a Facebook page devoted to the craze — and it has over 100 fans.

Vodka eyeballers claim to experience an instant high and deeper inebriation. Their medical rationale: The alcohol passes easily through the mucous membrane and enters the bloodstream through veins at the back of the eye for a quicker buzz than drinking.

While doctors have dismissed this reasoning, they are deeply concerned about long-term damage, like permanent scarring and deteriorating vision.

"In the past, vodka has been used as a disinfectant," Prof. Robin Touquet, a consultant in emergency medicine at St. Mary’s Hospital in Paddington, U.K., told the Daily Mail. "At 40% proof, imagine what it can do to an area as sensitive as the eye? It is highly toxic."

But, immune to sensible thinking and urged by peers to compete, students act recklessly and with disregard to the consequences.

Melissa Fontaine, a former university student and prolific vodka eyeballer, is troubled by a constantly watering eye and worries about future side effects.

“I'm in constant pain because of what I did,” Fontaine told the Daily Mail. “I'm terrified that it will get worse. I wish I could turn the clock back and change things. But I can't.”


I mean what the hell is going on with this? I like to get my drink on but pouring alcohol right into my eye ball just ain't my thing. I know people who wont even get contacts because they don't want to be messing with their eyes. What ever happened to kids throwing in a few bucks and buying a handle of Rubinoff vodka and a gallon of OJ? Then getting blasted!
Posted by d at Monday, August 23, 2010