Darts Update 1st round of the playoffs

This guy decided to show up... 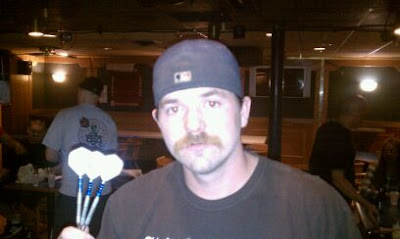 We finished the season in 3rd place in our division and in round 1 of the playoffs were seeded to play a team out of Chelsea. The playoff format is a home and home 2 game match and the first team to win 12 points advances. The team we played tonight was a very good team. Possibly the best we faced all season. As a team we played well and just about every match came down to the wire, but unfortunately we were on the losing end on all but 2 of the games. We have a tough road ahead of us on Thursday night at Peggy's but if we can get a few early wins, we will be right back into the match. As there were very few highlights, I'll just say we one 1 cricket game and 1 singles match. Not good!

Supa P was this week's MIA player and I was demoted to the 2nd player in 601. This turned out to be a great coaching decision as V got right on in his 1st turn and it was looking like the start of something great, but in the end we were just flat out beat in almost every game. As much as I would love to call out a few teammates for their performance, I really can't. As I said before, we all played well but they just played a little better. So if you are out on Thursday night stop by Peggy's around 8PM and cheer us on to the next round.
A few quotes did make the night better such as:
Who ya got Tupac or biggie? You gotta pick one because you can't like both!
What's up with that pussy fist pump?
There is something strange when a bar has to post a sign on the bathroom door that states, "only 1 person per stall"
Karaoke was made for that fool. 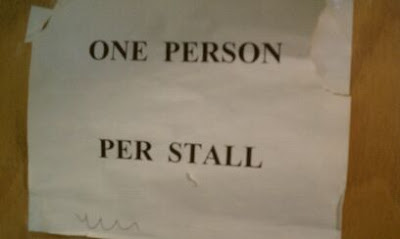 Sorry to be quick on this post, but it is 2:12AM and I am half in the bag and very pissed off because we did so poorly. Hopefully we will be able to rebound and I'll have more to say.
Prez.
Posted by Prez. at Wednesday, May 12, 2010