Guess what? The rains back

Just when it seems like the rain is all gone and the nice weather is here...it's like mother nature is a tease. I hope the weather warms up for this weekends Opening NIGHT festivities.

This is what I learned this weekend:
1. Glenn "Doc" Rivers is not a real doctor.
2. Apparently Bill Smiddy goes by the name Scotty when no one is around.
3. Every 16 minutes someone dies from a form of suicide.
4. Eating pasta before boozing makes me bloated.
5. People take Beer pong super serious but doing shots of Jameison in lieu of drinking beers is down right insane.
6. Salem, Ma. looks really nice but god damn isn't there an easier way to get there?
7. Kelly "Just the Tip" Armstrong MAY be off the market boys, Smiddy you missed that boat.
8. The NECCO candy head quarters is located in Revere. Who woulda known?
9. Papa Ginos has brought the Papaburger back for a limited time only.
10. Jeffrey's friend tried to get the shrimp taco from Taco bell but they were all sold out.
11. Sixty percent of lung cancer found in women are from non smokers.
12. People seem to think that my haircut makes me angry.
13. Oh and my goatee is long enough that apparently I look like Youk now.
14. Do you remember the times: 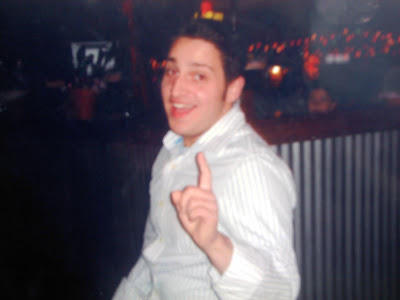 Is that scott paparo?

paparo would have a leather coat on while dancing at trinity!