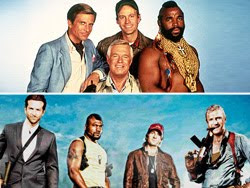 Growing up everyone loved the A-Team. It is so iconic - the song(I know your probably humming it now), the van and Mr. T's mohawk.

If you are in the minority and didn't like the A-team then you probably didn't enjoy The Dukes of Hazard, Magnum P.I., Knight Rider, Air Wolfe, or the Fall Guy either. You probably watched the Greatest American Hero and Alf(which I also enjoyed).

Like everything else they are doing a re-make with:
Liam Neeson as Colonel Hannibal Smith
Bradley Cooper as Lt. Templeton "Face" Peck
Quinton 'Rampage' Jackson as B.A. Baracus
Sharlto Copley as "Howling Mad" Murdoch

This brings me to the real topic, and something that I have meant to blog about for some time, Re-makes. Is Hollywood really that hard up that they have to keep remaking classics or even movies that were never that great? Don't give me that bullshit term "REBOOT" either. They are either lacking originality and new ideas or they are just lazy and don't want to push through anything new.

In the comments section leave what movies you would never want to see remade or rebooted.
Posted by d at Tuesday, January 12, 2010

Back to the Future!