Yesterday was not a holiday or a day off for me, I just did not have any time during the day to update the blog with things I learned. Work was busy, I took the dog for a walk down Bear cove, then food shopping and making dinner by the time I sat my fat ass down it was 8:00 and time for the Voice. I am not making excuses more so I am just letting you know I had a hectic Monday.

This is what I learned this weekend (Plus Monday)
1. Home made turkey burger aren't bad.
2. I think Chrissy checks this blog every Monday between 9:00 and 9:30 am and if there is no post; I get a text.
3. How do people have no manners? How hard is it to say please and thank you or excuse me?
4. Boston Beer Works brings the heat with their strong beer selection. Straight killing it.
5. Jeffrey is tiling his backsplash if anyone is interested in helping.
6. I wonder if the golfing community gets bored this season. I mean since some of them never stopped playing?

7. MikeyT got the game used B's puck for boozing: 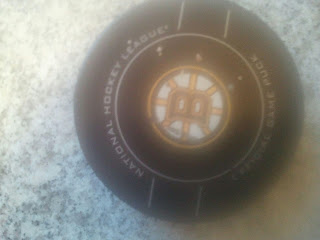 8. The Imperial Terrace in Quincy still has $2.75 beers and cheap mixed drinks.. I really thought it was 1998 all over again.
9. Rio is tearing it up in his EMT class. Dudes ripping off 86's and 93's at an alarming rate.
10. Bars have been finalized for the Pub crawl. Just working on the finishing touches for the shirts.
11. The Cask and Flagon are opening up a new joint in Marshfield.
12. Joey Martell must be hanging around with Smiddy because I never hear from either one of them.
13. Congrats to Dan Madden - his wife is preggers.
14. Has anyone fostered a dog before? Katie wants to try and help dogs/owners out. Just curious.
15. Even though St. Pattys day is on a Saturday this year it doesn't seem to have that buzz that it normally does around here.
16.  Are the Redsox serious, offering $75 tickets for opening day at $675?
17. In my 1st year of fantasy hockey I finished in 2nd place, 4 games back and a 1st round bye. Team DonkeyPunch is no joke!
18. I am killing it in Draw Something. I think I have 30-40 colors.
19. I think scones are under rated. Panera bread has some dope scones.
20. Are you officially old when you get up of the couch and actually hurt something? If so I am old.
21. The new pot pie from KFC is pretty good. Just not that filling but yet again its only $4.00.
Darts is tonight at Yesterdays. Stop by if you are in the neighborhood.
Posted by d at Tuesday, March 13, 2012

I told you about the Turkey Burgers......at the beginning of lent. You're welcome:))