I just want to start by saying "I do not want a game 7". I do not know if I can handle it. But if there is one I will be there, Towelman and all. 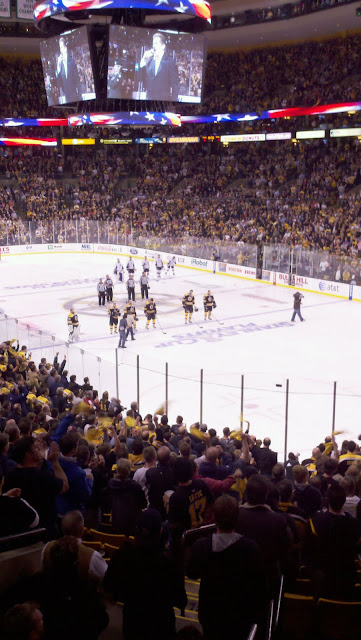 As the games go on, the tickets get more expensive and our crew is dwindling. That's the sacrifice for trying to reach the Cup.  MikeyT and I start out at The Northstar  for some dinner and drinks. No Big Bob today but we have Mario and Smashley going to the game. As we head up the escalators to go into the game they are filming and I am sure we were on TV, either NESN pregame or the national Versus coverage. That dude had me on the escalator for three quarters of the ride and then screaming go Bruins. If he didn't use it well then it's his loss!

We get into our seats 10 minutes before the puck drops. Apparently, Phil the guy who screams every second of the B's games is no longer coming to games this season, as he puts their season tickets in jeopardy. You get spoken too by one usher for foul language and your family takes your tickets away? I am calling BULLSHIT!
There is a feeling of high anxiety from the crowd. They are loud yet apprehensive. Just over a minute into the game and the B's are down 1-0. You could feel the air being sucked out of the building for the next 5 minutes. But the crowd slowly gets back into it with a "LETS GO BRUINS" chant. The Garden is humming and you can feel like this may be our night. Timmy Thomas does what Timmy Thomas does and makes save after save. We are ONLY down 1-0 after 1. I can't honestly remember the B's taking any shots.

Albie couldn't make the game but his sister did and she wanted to touch  the Towelman pouch: 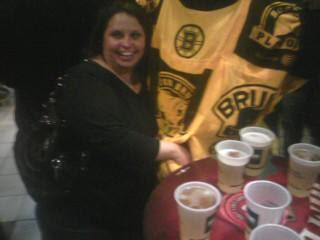 I mean who doesn't? Wayne-oh from the Garden staff even sought out Towelman to give him a fist pump.

The start of the second period has the B's buzzing and that can only be a good thing. A couple of dumb calls on Horton doesn't seem to slow their momentum. Horton more than makes up for his gaffes with a nice one timer, HORTON HEARS A HORN - WHOOOOOO!! MIKE SMITH WELCOME TO THE PLAYOFFS. The game is all tied up 1-1!( At this point the camera man officially hates Towelman. he will put everyone in our section up on the Jumbotron but me - I guess there is Towelman Hate out there people). After some hard work the B's finally take the lead on a goal by Brad Marshmont, B's up 2-1.

In between the 2nd and the 3rd period we are just hanging out when Dave Andreychuck, a former NHLer wants in on the Towelman action: 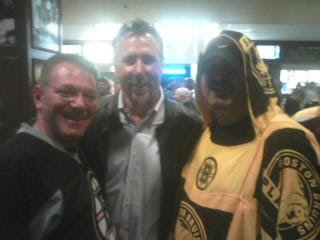 The action in the 3rd was fast. Tampa was doing anything it could to try and tie up the game. Thomas' save of the year with just over 10 minutes into the 3rd really amped up the team and the crowd. You could tell that Thomas would not let us lose. The final was 3-1 due to an empty netter from Rich Peverly. Let's hope they close this out tomorrow night in Tampa Bay. If not we are back at the Garden, Friday night for a Game 7 showdown.

It was good to see Rajon Rondo and Bill Belicheck at the game last night.
Posted by d at Tuesday, May 24, 2011