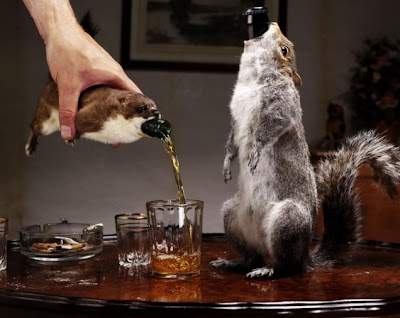 BrewDog, of Fraserburgh, Aberdeenshire, is the firm behind the new ale that's apparently stronger than whisky and vodka at 55 per cent volume.

Indeed, the brewer recommends that the tasty beverage is served in a shot glass 'to be enjoyed like a fine whisky'.

Twelve bottles of The End Of History have already slid off the production line and been placed inside seven dead stoats, four squirrels and one hare. 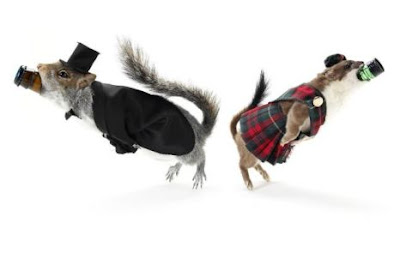 The animals weren't killed specifically for the purposes of housing the bottles, but died of natural causes.

The critters also sport a range of eye-catching outfits including a kilt and a top hat.

BrewDog co-founder James Watt describes The End Of History as 'a perfect conceptual marriage between taxidermy, art and craft brewing'.

'This is the beer to end all beers. It's an audacious blend of eccentricity, artistry and rebellion; changing the general perception of beer, one stuffed animal at a time,' he continues.

'The bottles are at once beautiful and disturbing - they disrupt conventions and break taboos, just like the beer they hold within them.'

Infused with nettles and juniper berries, the blond Belgian ale is created by freezing the liquid to separate water from the solution, fact fans will be delighted to know.

My weddings coming up. I want a bottle of this to celebrate. THAT IS ALL!
Posted by d at Thursday, July 22, 2010