Yeah I know it is Wednesday and I have yet to post things I learned this weekend. I was at the game on Monday and yesterday I had tons of shit to do so I just didn't have the time. So here it is...

Things I learned this weekend:
1. William J. Smiddy is good at video game bowling.
2. Some people are just ungrateful when it comes to getting seats at the game.
3. Tough life after getting his nuts chopped off.

4. Towel man was a huge success at the B's game: 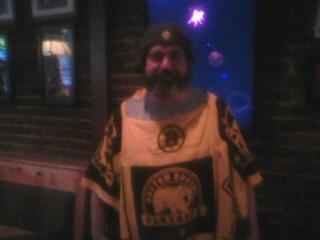 5. This dude right here always shows up at the right time and always for a good laugh or SIX!
6. Marathon Monday Plus the Sox Plus the B's Playoffs game = awesome times: 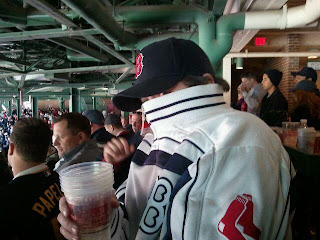 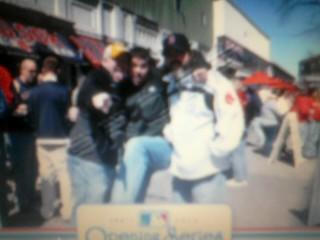 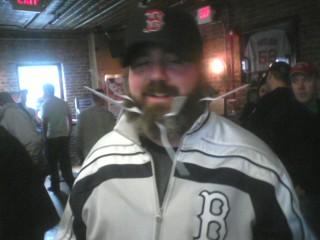 7. William J Smiddy doesn't make it to many sporting events, even though he is the self proclaimed king of Boston sports: 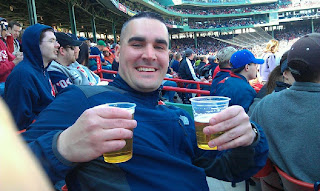 8. Guacamole can give you green shits! Yes green SHIT!
9. Folan's key to the Bruins victory is STICKS ON THE ICE. Who can argue with that?
10. Mario enjoyed his first Marathon Monday drinkfest.
11. Thank god Marathon Monday happens but once a year. I don't think my wallet can handle it.
12. Cheifdude found out that I have an uncommon dog as a pet.
13. Anyone who wants to play Chrisy in word with friends his user name is Chrisy143.
14. I saw quite a few people out this weekend who are gearing up for the MPC and they have some impressive growth.
15. I am fucking up Theraflu at an alarming pace. This cold/flu that I am fighting sucks donkey balls.
16. I thought getting Ronin neutered would at least make him more relaxed for a few days. No such luck.
17. Jermaine O'Neil has found the fountain of youth.
I didn't take notes or anything at darts but we were at Trinity. The beers were crazy expensive and I was under the weather. Jeffrey and Foley couldn't/didn't make it. We swept the 1st 6 matches(the highlight was Welchie hitting 2 double bulls to end the cricket match) and were cruising along when I lost in 301. Shaun Larry Billy Bob hung tough but lost as well, 6-2(he did run out and get a bucket of teriyaiki from the Hong Kong next door). With only 4 matches left Jeb, Welchie, Supah and Brighty brought home a huge win 10-2. That should give us a bit of a cushion with 1st place and a bye next week. The last match of the season will be at Peggys against St Marks Post and we will see how close the 2nd place team is at that time. Hope to see ya then.
KevBarry where are you?
Posted by d at Wednesday, April 20, 2011

Im there in spirit. I moved 1500 miles away and Ive still been to more darts than Jeffrey.