Here's some cheaters to look up to, Patriots. 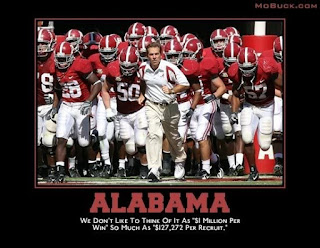 First let me get a little something off my chest. If your going to blog attach a name to it. Rule # 1 of the blog game. Take me for example, CBR, that's the name. I own the love and the hate with it. Whoever this TMX clown is, get a name will you. Doesn't have to be your own. I'm still personally trying to figure out who this Calnan kid is. But Jesus get a name and own it.

Second, it's that time of the year again! When everyone except New Englanders gets giddy for College Footballs return. And with Deflategate dominating the headlines I'd figure I'd try to tie it in to this rant.

So here it is. Alabama is the New England Patriots of College football. Why? Because they're a pack of cheaters (good cheaters) like the Pats.

And while the Pats dabble in deflated footballs, opening stadium doors to effect wind and pumping noise into a listless morgue like stadium. Good ole Bama does this right in everyone's face with recruiting. Year after year same thing on social media some commit signs with Bama within days or hours tweeting pics of some ridiculous gift. Grew up in destitute southern poverty? Here have a car compliments of Nick Saban.

Which brings me to the next similarity. Ever think you could think of a more pompous arrogant duche then Bellichick? Well I got news for you his name is Nick Saban toss in egomaniacal and their the same person. Both geniuses and winners but Jesus awful people. Jerks to nearly everyone. However, Saban has the distinction of being run out of the NFL for being too crazy towards players.

So how does this mesh with Deflategate you ask? Well when's the last time you've seen Alabama caught for anything in recent years? Cheating, NCAA violations, players smoking PCP and murdering? The answer is you haven't. Why? Because their good. Much like the Pats, they have been wildly successful, command a huge market share and are at the forefront of any CFB discussion.

So to Bellichick. Perhaps it's time to call up your old friend Nick Saban. Same Saban you got the ineligible receiver scheme from, yea know the one Saban uses but moron Pats fans credit to you. And ask him how do I cheat better????

Shout out to Chrissy prob the only Drunknothings reader who follows college.
Posted by ChiefBlogRuinner at Tuesday, August 04, 2015

CBR SPEAK YA MIND!!
Put on your Bob Seger Cds, drink your purple Ciroc(because everyone knows you and Pdiddy run the city) and do yo!!

I do love college football!