My day started out of state for a work conference which ended up being a Fat Tuesday party with some new friends from Texas who were pounding bloody marys before 8AM. As I was told via a text message, I should question my dedication like the Sox pitchers and the chicken and beer incident. To that I say GFY, darts and drinking go hand and hand. Additionally, I made it to the match which is more than I can say for a few others (including the texter) which I will address later.

So upon my arrival the first thing I see is Chrissy “The King of Wings” looking like Kobayashi in his prime. 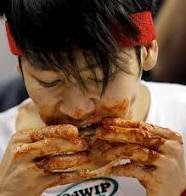 Unfortunately, there was a big letdown when he could not finish the plate and asked for a to-go container.

The next disappointment came when I looked at the roster and found my name noticeably absent from cricket. I first thought Captain P was benching me to send a message, but I soon found out he was absent and fighting a case of the “Green Apple 2-step” AKA the shits. Special guest captain Derek W. made that call so you can all thank / blame him. I still think I need to reach out to CBV to come out of retirement to redeem myself and right this ship. 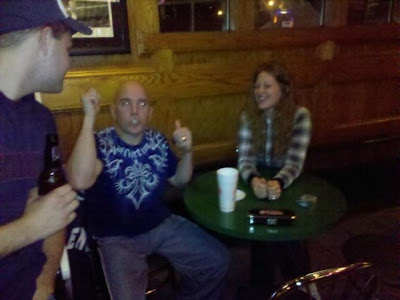 I am announcing a changing of the guard in the Super Fan category. 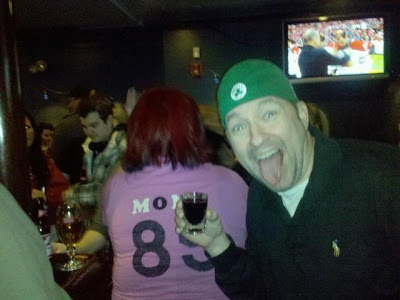 Sorry Mike T. but your desire for O/T and your other Allan Iverson like BS excuses do not fly in my book. Chrissy and a few others made their bid to take the crown but Ben Wallace (fear the Fro) and I had a meeting and we decided to give the nod to the Sassman. 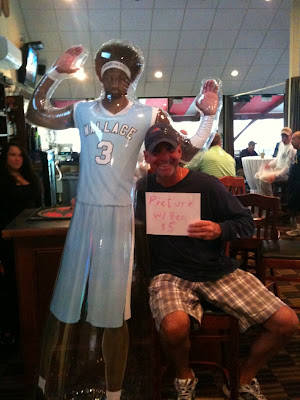 The beats were ok until some donkey played Rod Stewart which was about the same time we found out they were out of Coors Light. No problem for the BL & ML drinkers, but it caused havoc on half of the squad which might explain Jeffrey knocking over the same case of empties twice. The beats quickly rallied with Mickey Avalon’s My Dick however the Coors Light supply did not. On a side note, we need to increase our beer kitty from $20 to $30. I’m not sure if it's the economy or an increase in tolerance, but the initial suck has run dry every week.

Now on to the matches:
501: Lost 2 of 3 and the struggles continue
Bright & Jeb jumped out to a 400+ point lead against a guy wearing pajamas. They let the other team back in it but managed to the close the deal and start the night off with a win.

Foley & Shawn Larry took a few hundred shots to get on and could not catch up. Not a good effort, not a good result. Loss

Derek & Jared played a tough game which was close start to finish. In the end it was just another loss.

Cricket: Won 2 of 3
Mark & Jeff ran into a point fest and could not keep up. They played well but came up short.

Bright & Jared jumped out to an early lead and did not look back. This was a very classy win with no points scored on either side. Close numbers and win the game that's how it's supposed to happen.

Dillon & Jeb tied up the overall match with a nice win that featured the cleanest scoreboard ever thanks to Welchies scoring debut.

Jeff's match went 3 games and he played great. He tossed at least 3 100+ throws including a 145 to take the man down.

Derek: Game 1 he had a tough time getting in and lost. Game 2: Similar to game one he had a tough time getting on and spotted a big lead. When he did get in he made a nice comeback and with my great coaching he won. In game 3 he jumped on first and pounded it down. The opponent got right on and scored big points with each throw including a 140 to take the lead. Derek hung tough but lost a close one.

Mark: In game 1 he spotted her, yes I said HER, about a 200 point lead but rallied up to take game 1. Game 2 he jumped out to an early lead and never looked back. Tons of pressure playing a female but he was up to the task.

Foley lost in a three game set. All 3 were close and the last game came down to dubs. No luck for this Irish man.

Jared: He had an easy win in game 1. In game 2 he took a big lead early but faded and lost. Game 3 was a real barnburner and he got it done.


We are at Paddy Barry's next week and we’ll see if Sassi wants to keep his title. He will either be with us mourning the loss of the Pony Room, or throwing the crown away to celebrate their grand re-opening.


'Til next time bitches,
Prez.

I thought Foley wasn't invited back now hes a co-captain. Lost a lot of respect for this team

first of all, i didnt know i was being watched to eat the entire order of wings. if you got there early then you would have known i ordered extra for a snack later. second, you gave fan the super fan to a guy that was there for 20 minutes?? how is that being a fan? is it cuz he didnt make fun of you and i did?

this whole blog write up and you didnt talk about asking out of the cricket match. how you havent won a match yet all year. and how you asked welch to let you play the girl so maybe you could finally get that W

Chrissy,
Is the best at everything!!! When I read story I knew those wings you were taking home were to put into your ashtray for a snack.

Question a lot about the kid but his wing appetite? Criminal. Ban this kid from blogging derek. Bring back chiefdude in his pkace